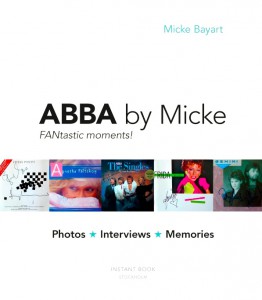 Micke Bayart is the author of the book ‘ABBA by Micke’, written in English. Accompany on 120 pages a group of dedicated ABBA fans in the mid 80s, covering small and major events involving members of ABBA for a German fan club publication named ABBA Fan-Blatt.

In fact, by that time, ABBA had already disbanded as a group and the members had launched new careers. Björn and Benny were receiving attention for their musical, Chess, while Agnetha and Frida were releasing their own solo albums. In this book, we follow in the group members’ footsteps through articles from Fan-Blatt. The most striking feature, of course, is the fact that ABBA Fan-Blatt met the members and interviewed them on several occasions. These meetings took place in connection with ABBA’s appearances in Germany, at Polar Studios or in the Polar Office in Stockholm. For even if ABBA’s golden days were over, there were still a great many fans that were eager to be kept up to date about news of the group.

Please send an email to azul@bayart.se for your personal copy. State clearly the quantity of books, your name and address when placing your order.

After that, you receive an e-mail summarizing your order (€ 18/copy plus shipping costs).

This site uses Akismet to reduce spam. Learn how your comment data is processed.